The monochromatic twilight draped the sun in a shadow-like shawl.

Suddenly, a black cat darted out of the dark void of a doorway, streaking like lightning along the street, flanked by the ominous, dark-windowed buildings. A steady dripping echoed along the alleyway, the source unknown.

I paced through the pools of light, staring at the flickering bulbs set in their hoods of steel.

Somewhere, a restaurant vent spilled delicious scents into the alley. As I turned the corner though, it was replaced by the stink of decomposing peelings and the fumes of the upturned bin down the street.

The brisk click-clack of high heels began as someone began to trot down the narrow, concrete prison of the alley. I felt uneasy. I waited for the woman to pass me. As she did, she looked at me as if I had just been rolling in the rubbish scattered across her path.

Once she had disappeared, the quickly-falling night became silent again. I happened to glance at a widow and noted the brief twitch of the curtain. I ignored it and carried on until I reached my destination.

The address I held in my hand read 24b Stricken Road.

The building I was looking at was tall and grey with dark windows. I knocked on the peeling red door. A flake of paint came off on my knuckles.

Disturbingly, it reminded me of blood.

Molly is more magpie than dog. Surreptitiously, she pads through the kitchen on scheming paws. Her tail is like the fin of a shark, poking out in the sea of the kitchen counters. Her tongue is like an anteater’s; it has a mind of its own, pulling herself towards the distinct sound of knives cluttering as they enter the dishwasher. Once she is at her destination of the mighty dishwasher, she cannot be distracted. Her name is shouted as door starts to close, yet her tongue stays put. The door starts to press against her shaggy, inky fur, like a guillotine on an aristocrat’s neck. We grab her beaded collar and jerk her head away so she does not end up like Mary Antoinette.

Obviously, the dishwasher was not enough for poor, hungry Molly. She suspiciously prances up the stairs, stopping when she hears us make a noise. She gallops to the other side of the house. Smirking at her own intelligence, she switches into thief mode. Carefully, she edges down the stairs and laughs when she sees the other kitchen door wide open. She trots in seeing opportunity in every bowl left full. She realises that my mum’s favourite bowl is full of food. Molly decides the best choice is to go for the favourite bowl that is balancing precariously on the stove. It drops and smashes and smothers the kitchen floor with pasta.

She keeps her head bowed down low and her tail gently sways as we rush into the kitchen. She wanders off, trying to act as innocent as possible.

The Picture of Dorian Gray- Analysis Story Board 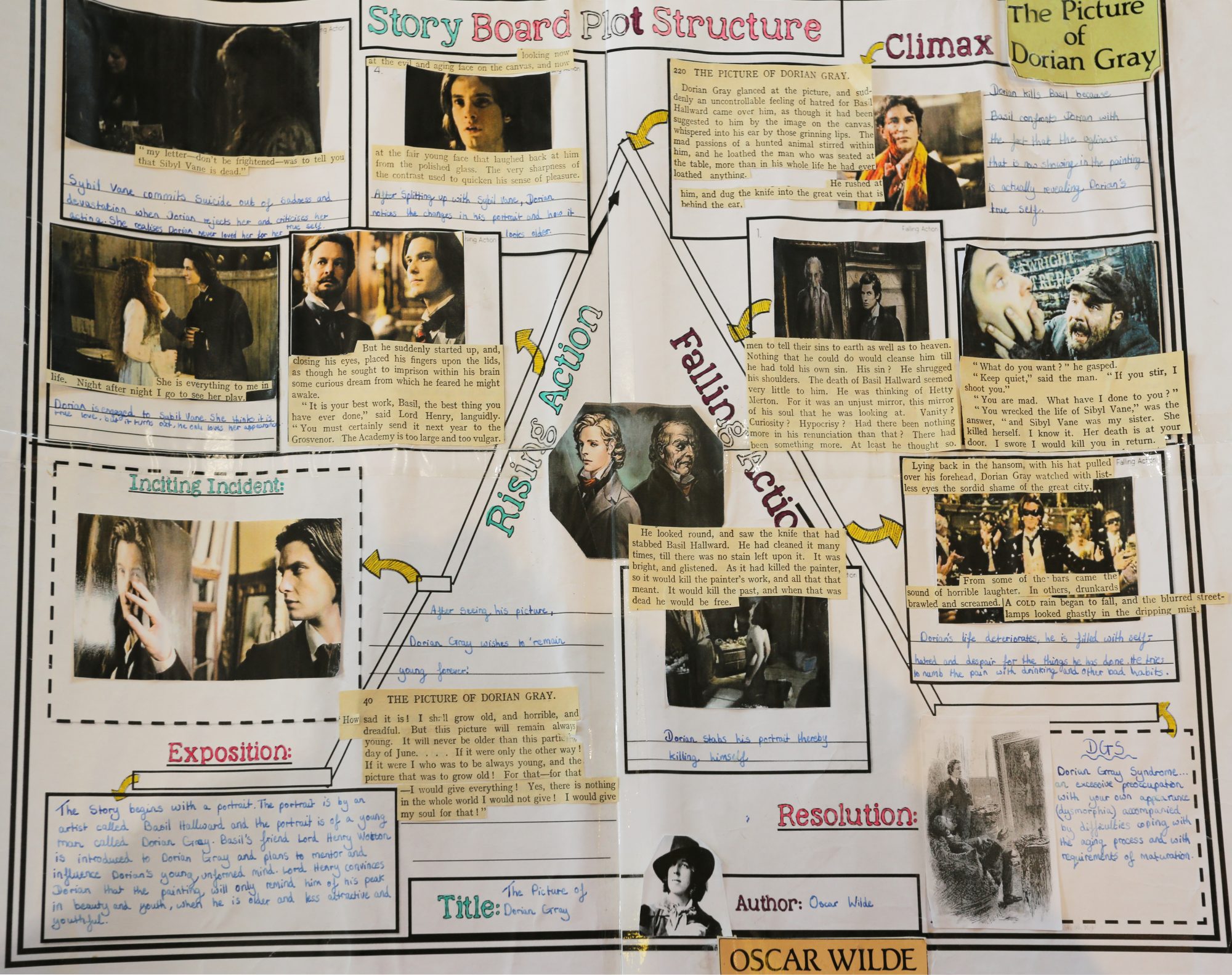 Three of our Hanford girls went for Drama scholarships at …

This year our two sports scholars excelled in all areas …

In 2021 one Hanford girl was offered 2 scholarship awards …

This year Hanford girls were awarded 2 Academic scholarships and …