Congratulations to Cheryl for her achievement in the recent writing competition she took part in, with the Australian and New Zealand Association in Singapore. Below is her story
THE LAST LEOPARD CATS

The sky was ablaze with the fire of the setting sun as the night sky claimed the dusk. A pair of deep golden eyes slipped through the maze of the turning colourless vegetation as the night sky grew inky black, making way for the prized collection of stars and the pale crescent moon that shone like a silvery claw in the night sky.

Sniffing the balmy breeze, a slender body paused in the cover of the undergrowth, eyes fixed on its prey. A small Annandale rat nibbled delicately on a nut under a tree, simply oblivious that it was about to become a hungry feline’s dinner. Suddenly, in the blink of an eye, it pounced. Sinking its fangs into the rat’s throat, it ripped out its life with a single bite. Triumphantly, it lifted the limp rat by the tail into the air. Swinging its prize, it sauntered towards its final destination.

“Where have you been?!” a screech sounded shrilly as the hunter slid guiltily into the hollow tree den.

“I was hungry, so I went out to hunt,” Pura tried, not meeting her mother’s eyes.

“You heard what Father said, didn’t you? It’s dangerous out there with the trees being cut down,” her brother retorted.

Pura still didn’t look up. “At least I brought dinner,” she made a muffled meow.

Her mother sighed, “Please don’t go out to hunt by yourself. You are still very young and don’t know the dangers of the forest.”

Pura nodded and slunk off to her nest at the far corner of the hollow tree, waiting for sleep to find her.

The next day, Pura rose to find the den empty. Her family had probably already gone hunting at dawn. She stepped out of their tree into the clearing. The clearing had plenty of room to play fight and the beautiful surrounding saga trees were perfect to laze on. There was also a small, crystal clear stream that ran at the edge of the clearing, providing the family with a sufficient water source that would never run out. Their family of Singapore wild Leopard Cats had seen a migration of other animals, having lost their dens and nests to recent logging activities in the forest. Pura flashed a look at the sky, the sun was

directly above her. They should be back by now, she thought.

Suddenly, her sister burst into the clearing and meowed breathlessly at lightning speed.

“Pura, hide! Mother has been captured by a two- legged creature!” warned the sibling as she raced and disappeared into the safety of the tree den. However, being Pura, she streaked towards the opposite way where she heard hissing and screeching.

Finally, Pura found her father and brother scratching and hissing at a big, strange two-legged creature who was holding a trap in which their mother was being held captive. Enraged, Pura leapt at the creature determined to help. But after a few scratches, the huge creature swung out a giant hairless paw, sweeping all three of them away and ran off to the edge of the forest.

Instinctively, Pura and her brother landed on
all fours. Their father sank onto the forest floor in profound grief. They all knew, Mother would never come back again.

After what seemed like an endless silence, their father shook his head, his copper eyes dull. He trudged back to their home in silence, followed by Pura and her brother.

The heartbroken family of the last few surviving wild Leopard Cats gathered in the tree den. Their father regretfully said, “I should have told you about this earlier, but you had to experience such an unfortunate event so early in your lives. That beast is called a human and there are many more of them around. They cut trees down threatening our home and kill us for fur. I was meaning to tell you when you are older. Please stay away from them and no sneaking out at night alone, Pura.”

The kittens huddled together and listened on in stunned silence. Pura wondered if there would ever be a way to live with the humans, respectful of each other’s lives and territories. 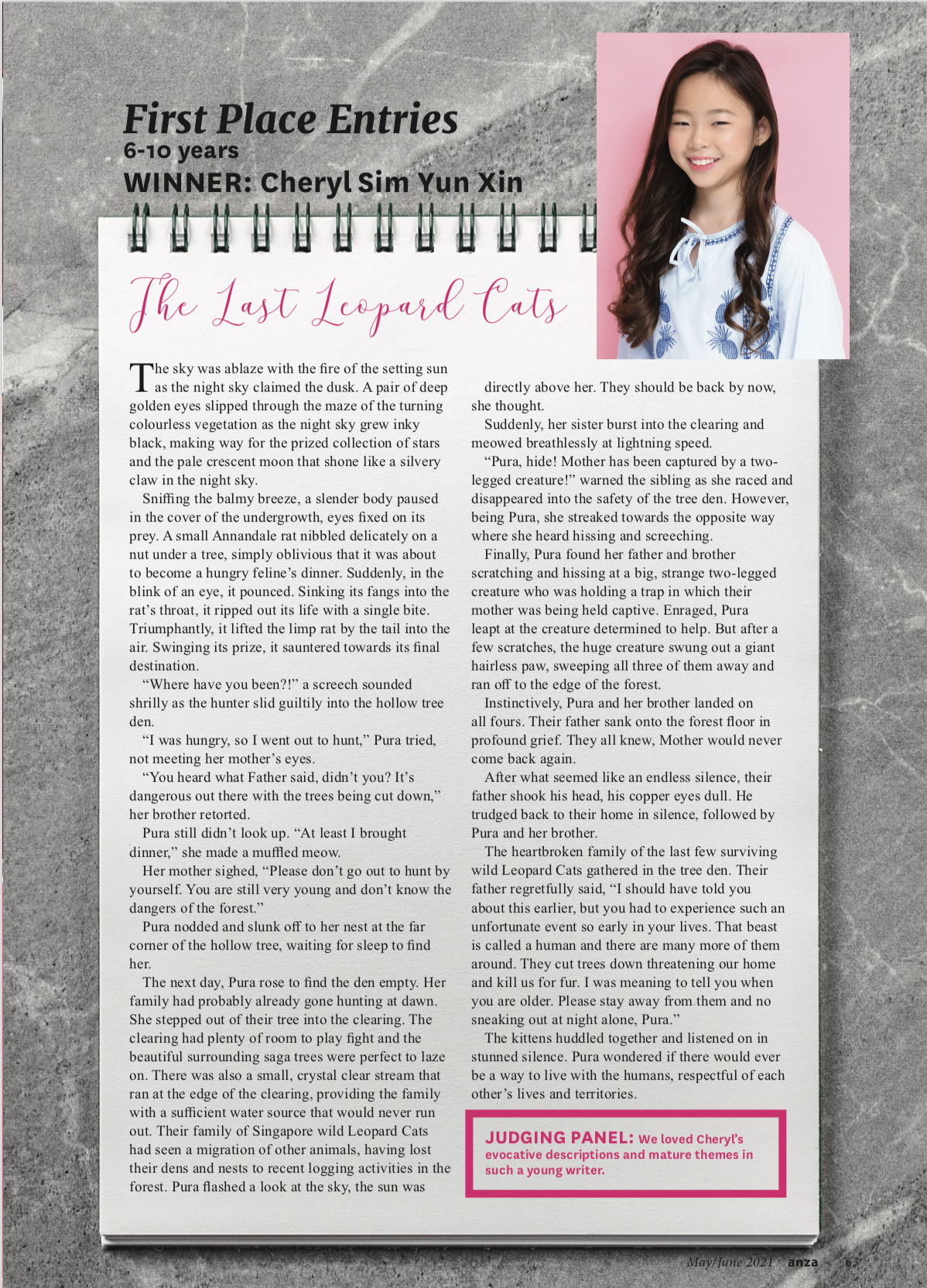 About 300 former, present and future Hanford girls gathered at …

The theme of this term’s wellbeing day was ‘Celebrating Differences’ …

After a lot of hard work and preparation, on Sunday …